Return to the STRONGHOLD, You prisoners of HOPE...
Zechariah 9:12

Winning the Battle Against Cancer:
They said I was going to die... but, I didn't
by Elaine Hulliberger

The First 60-Seconds of Cancer

I’m told that I have cancer. It’s terminal. I have only two months to live. I’m instantly wrapped in an empty void. No one is in there with me. I’m truly alone. A door has slammed shut, and I feel it lock tight. I can’t touch the key because it’s only a word. Cancer is the storm that blew the door closed, and it is the key that locked me out of my right to live. I’m terrified. I’m broken. I take my next breath. My oncologist is saying, “I can’t treat you.” No! I need help! I want to fight for my life! Someone has to help me do what I don’t know how to do. Someone has to help me do what I can’t do alone! So, I find another oncologist. This one says, “I won’t treat you.” “Why,” I ask? “Because there might be more cancer in your liver than shows on the PET scan.” “What do you mean...might?” Three oncologists, a GP, and a surgeon all delivered the same grim outcome. I had nine cancer sites that had spread from the original site in the colon. All the help the oncologists were willing to give me was advice: Go home and get your affairs in order. This is where I found myself in November of 2005, just three months after my husband dropped dead at my feet. I wish I had known then what I know now. But, of course, I didn’t. A victim of cancer, any type of cancer, can dredge up the courage to fight the disease, the faith to renounce their death sentence, and to keep their hope, born from their own grit, to see their battle with cancer through to a good outcome.

The Long Road Back

Many, if not most people, have no idea there are options to consider in their battle with cancer. Victims of cancer aren’t concerned about their choices and options when they are first diagnosed. They’re looking at an oncologist, a man or a woman, who is driven by statistics that he or she uses to predict the patient’s outcome. The doctors know all about the drugs, the pain, and the desperation of the patient’s circumstances. Very few, if any, know about products like Protocel®. The medical world knows all about cancer and they’ve seen the drugs used to treat cancer fail too many times. They aren’t taught in their universities about non-toxic and/or natural treatments. Somewhere along the way, too many of them have lost the ability to bring along compassion to the treatment table. It’s as though they’ve forgotten that the patient’s heart and soul aren’t just by-products of the patient’s self. Our hearts and souls are the very spirit that gives us meaning. Our spirits are an essential part of our recovery. They seem to have forgotten that our spirit is that part of us that makes us tick, that helps us fight, that allows us to believe that we really can win. My brother and sister-in-law helped me find an oncologist who would give me the right to fight my disease, and who was willing to do whatever he could to give me the chance to go on with life. I had to drive 250 miles each way to get the treatments that I couldn’t find at home. But, I didn’t care one bit. I had to do what I had to do. I took the help I was offered, and I thanked God for the one doctor who would fight with me. Time, however, was all he could offer. My cancer was too aggressive, he said, and had spread too far to hope that it could be cured. He felt he could extend my life to a year if I chose to take his treatments. He sent me to a colorectal surgeon that he had faith in. The surgeon who examined me felt I should have colorectal surgery immediately. However, my oncologist told me that I didn’t have enough lifetime left to consider the surgery. I needed to get the chemotherapy drugs started as quickly as possible. So, I was given 51 hours of three different chemotherapy drugs, and one drug booster, every other week for six months. I nearly died of pneumonia after the first chemotherapy treatment. I wanted to die after the second, as the drugs were burning my esophagus so badly I could barely sip water. I couldn’t take the third treatment because my blood counts (neutrophils) were so very low. It was at this time in my battle with cancer and the horrible chemotherapy drugs that my cousin introduced me to a non-toxic product called Protocel®. At first I dismissed Protocel®, thinking that if battery acid (chemotherapy drugs) couldn’t kill the cancer, then how could I believe that something natural could. My next thought was, “What’s it going to do…kill me?” I decided to give it a try. What follows after my introduction to the drugs combined with this non-toxic supplement, Protocel®, is the ‘Happy Ending’. My story is riddled with block walls, and tells of the tools needed to tear the walls down. It’s a story that can belong to anyone who really wants to fight and win. It can be your ‘happy ending’ as well as mine. Our local newspaper did an article on my battle with cancer and my recovery. Because that article zipped across the Internet, I talk with cancer victims all over the country and some in Canada. People are desperate for options. Their power to reason is dwarfed by their fear. They are looking for a solution, a tool, a hope, anything that will help them back to health. Am I different that you? No. Do I have a better chance than you to be healed? No. My answer to this disease can be anyone’s answer. I’ve come back from sure death with less than two months left to live. I had colon cancer in nine sites. I had just lost my husband. Listen to me…“If I can win the battle against cancer…so can you.” But, don’t take my word for it. Research Protocel®…read about it…talk to the victors who have taken it and those who are still fighting. LIVE. Call me if you like, I’ll talk to you. I’ll help you in any way I can. But…you have to fight! Cancer has to be stopped. And, cancer can be stopped. I should not be alive today, but I am alive today. Chemotherapy drugs, radiation, surgery, and radio wave treatments are helpful in some cases. But, they are surely not the only choice victims have. Not by a long shot. Protocel® is why I’m able to write this to you today. I’m not in remission folks…I’m cancer free! The word. The Cancer word. It doesn’t have to be a death sentence. Elaine Hulliberger
hully@att.net
www.elainesmiracle.com 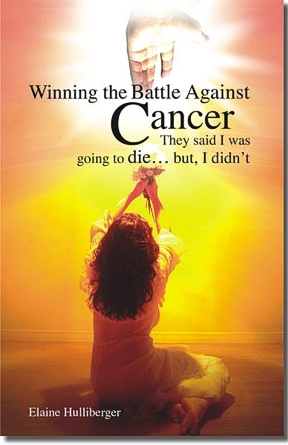